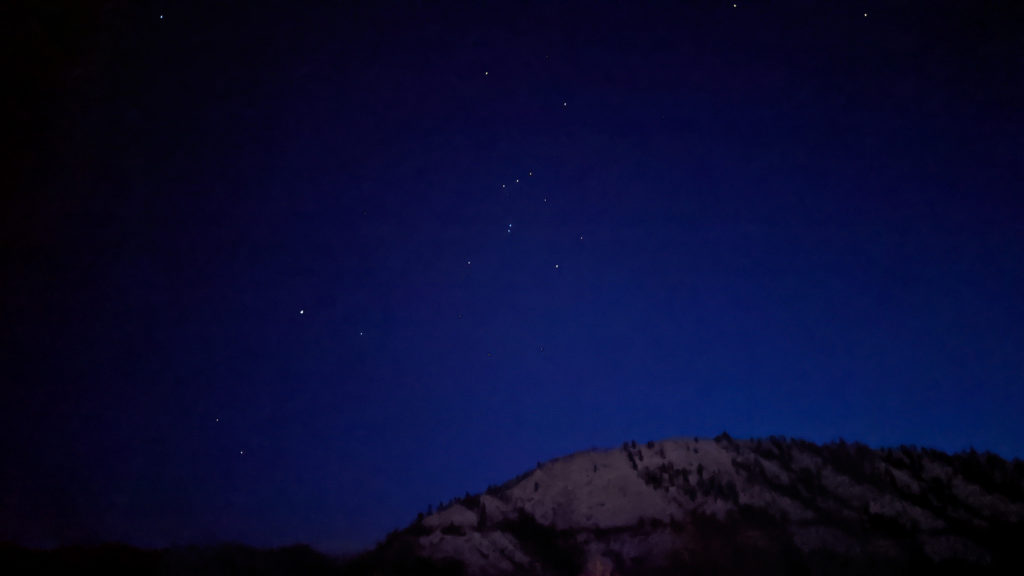 The other day, I was walking on the edge of the valley where I live, an area elevated above the small town with views straight across the valley to the Cascade range. The sun had dropped below the horizon awhile before and the mountains were fading into the starlight. I like the starlight, because it hides the surrounding world that otherwise controls our thoughts all day long. And it reminds me of heaven, and heaven’s a nice place to think about.

This weekend commemorates the weekend 2,000 years ago when Jesus died, and as so many say, “paid the ultimate sacrifice”. The phrase has been used so much it’s cliche. Then it hit me. The word “ultimate” has two main definitions. It means best, and greatest, which is how we usually think of it. Jesus paid the best and greatest sacrifice. Yes, no sacrifice is greater than one’s own life. But the other definition of “ultimate”, which dictionaries list as the more important definition, is last. Final.

Not only did Jesus pay the greatest sacrifice, it was as his last sacrifice. On the cross, he had no assurance he would be resurrected. My Bible says that he cried out, pleading “My God, my God, why have you forsaken me?” God has promised to never forsake His children, and surely not only were there angels, but God Himself was there at the cross. However, He couldn’t reveal Himself, for as He said to Moses, sin and sinners would perish if He showed His true glory. And on the cross, Jesus was carrying the sin of every person in history—of you, and me. God would never—could never—forsake Him, but Jesus could not know His presence.

Jesus thought He had been forsaken and cut off from His dear Father. He would die, eternally. We know He was all-powerful—He could have come down off the cross, but He didn’t. Why? Why did He face what looked like certain death when He could have come down? For the sake of His love for us! He knew that if He gave up the burden of our sin, we would die eternally. So he determined to die instead.

What kind of love is that? To give up His kingship, the glories of heaven, and His Father who He loved more dearly than any love we are capable of knowing, for a violent death, all for love of us? We hardly deserve it, after failing and betraying Him over and over.

It’s the truest kind of love. The kind of love that would die so that your friend can live; your friend, who, by the way, hardly ever wants to spend time with you and can’t stop stealing your money.

That realization shook my mind. The sacrifice was indeed ultimate—final! Our dear Jesus thought He was facing eternal death. For you. For me. There’s more though, because He asks us to do the same. “Love one another,” He said, “As I have loved you.” (John 13:34). I abruptly halted my walk as that thought came to my mind. How can I? How can I be willing to give up my own eternal life, my heaven? Isn’t that what our goal is?

No. Rewind. Our goal should be infinite love for Christ, and service to Him as long as we live. Heaven and eternal life is only the reward. And if we’re focusing completely on the reward, we lose sight of the goal—our relationship with Christ. Moses was so devoted to the goal, serving Christ, that when the people whom he led rebelled and built the golden calf, Moses said, “Yet now, if You will forgive their sin—but if not, I pray, blot me out of Your book which You have written.” (Exodus 32:32) Again, we see this ultimate, transcending love. Moses had it too.

And I want it. I want to love so much that I’m willing to give up the reward for the sake of the goal. That I’d give everything—my life—so that you can experience the love of God. Fist clenched, I glanced back at the stars, beyond which, somewhere, I know God is. Heaven sounds great, but my Father is what makes it great. “You’re my goal, Father, and just knowing you is the only reward I need.”

If I’ve ever seen God smile, it was then.