Weeping May Endure for a Night 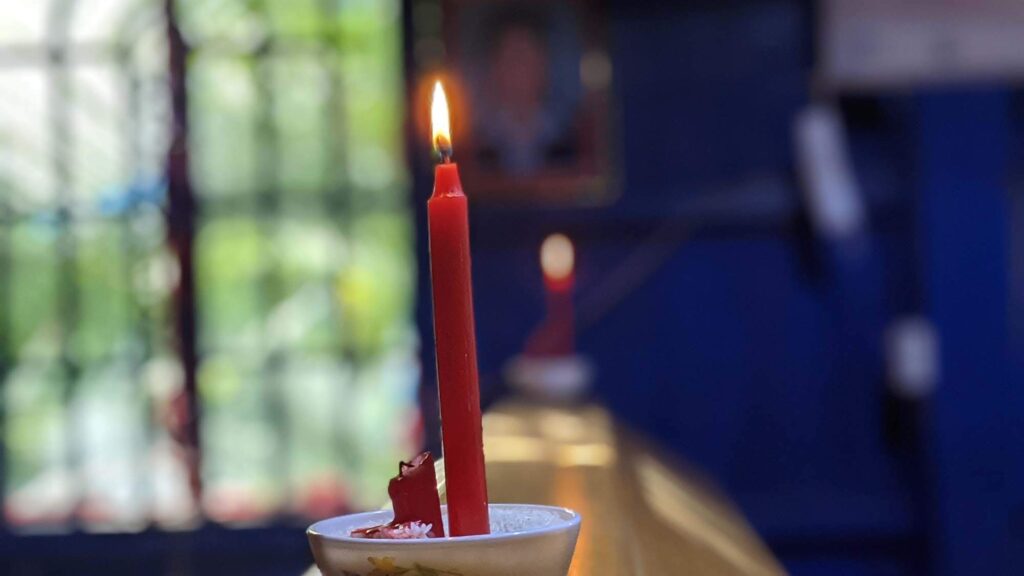 Much of the time, life in Cambodia bears a lot of similarities to life in the West, in spite of its differences. It’s nothing like the old jungle mission stories, where reclusive jungle tribes thought of the newly-developing field of electronics as magic, and any white people were thought of as baby-eaters. To the contrary, internet access is just as widespread here as in America, and much cheaper. Most people have a smartphone, and everyone uses Facebook.

There are things that aren’t similar at all.

As I write this, I am sitting in the home of an Adventist family in the village where I live. The parents joined the church only 2-3 years ago, and their oldest son was baptized last month. They were a wonderful family, serving a large part in the local church, and a joy to be friends with.

The sun went down an hour ago. One dim light bulb illuminates the front room of their home, with its dusty cement floor and walls, and the metal sheets that make up the roof. The front windows and door are comprised of polished tree branches, lashed together. A few dim, solar-powered lights hang in the front yard. It’s raining outside. Instrumental Christian music plays from the speaker which was erected this morning over the house… the call for the neighborhood to come and comfort the family in this terrible time.

You see, their mother died yesterday. A couple weeks ago, she had been horribly burned by gasoline, and she finally lost the fight. Two hours ago, we had a prayer service in the upper room where she lay, then laid her in the casket, for the burial service tomorrow. All the local church members came this afternoon, and a few close family members… but that’s all.

Why do these things happen? Well, I know the answer: it’s called sin. The music is still playing– loudly– above the house, comforting in a way, but also a continual reminder of the lack of support from the neighborhood. It’s obviously Christian music, and nobody wants to risk retribution from the spirits by attending a Christian funeral. In Western culture, it’s hard to understand the significance of this: but here in Southeast Asia, funerals and weddings are community affairs. Everybody is not only welcome to come: their presence is expected. The lack of support this weekend has been one more hard blow to the family after a terrible couple of weeks.

The End of the Story

Well… there is no end to these stories. The effects of tragedy are, by definition, impossible to undo or cover up. It’s a month later now, and I’m finally finishing this post. The burial service was a strange but beautiful affair. After the procession on foot to the burial site almost a kilometer away, a pastor who had been able to attend shared perhaps one of the most beautiful memorial messages we’d ever heard– a gentle reminder (or for some, an introduction) to the concept of God’s love and mercy. We believe that we will see her again, someday.

Afterwards, we placed the casket in the hole and began covering it. The woman’s sister knelt by the grave, wailing with grief, an eerie sound, the like of which I have never heard before, and hope to never hear again. I have a new understanding of the mourners in the New Testament… The church members sung softly in the background, through tears. I cannot forget the scene, the contrast.

So yes, life in Cambodia has a lot of differences to life in the west, in spite of its similarities. The people live in darkness, in continual fear of the spirits. Meanwhile, we live in the light, for we know who we believe in: the God who created the light, as a gift for us. The God who, we know, actually loves us. They live in fear, while we live in trust. Of course, the two sides are completely incompatible. In this contrast, it takes an incredible amount of faith to cut ties with the spirits and turn to God. This is why it’s such a beautiful thing when someone bravely steps into the light.

The family will deal with grief for a long time, but they’re still trusting. And the woman’s mother, who had never before been interested in Christianity? She’s starting Bible studies. Satan is strong, but God is stronger. Keep them in your prayers.

Indeed, “weeping may endure for a night, but joy cometh in the morning.” (Psalm 30:5)

3 thoughts on “Weeping May Endure for a Night”