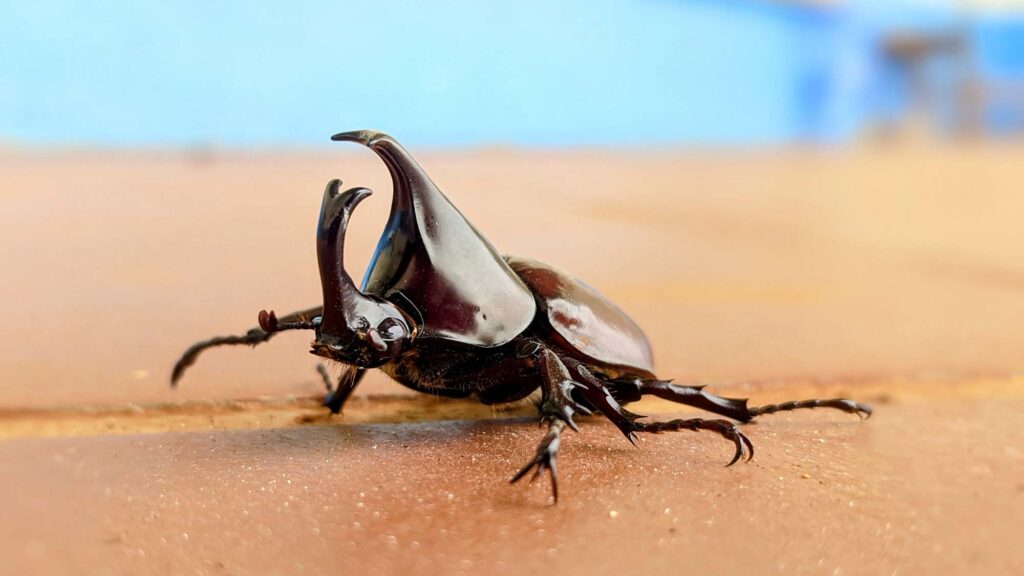 I would venture to guess that you’ve never seen a more armored beetle than the one in the photo above. These Cambodian Rhinoceros Beetles do indeed look intimidating the first time you meet them. But actually… For all their armor, they’re rather helpless little beasts.

All their strength and armor may help protect them against other creatures. But there’s one time it doesn’t help.

If they are flipped onto their back.

I was walking around the school the other day and saw several of the little soldiers lying helpless on their backs. A few were near death. Some already were… Dead.

This particular beetle lay on his back, his legs waving slowly like palm branches in the wind. Occasionally he’d try to use his wings to move, the only result being a buzzing sound that resembled a series of frustrated grunts. He was helpless. And left alone, he would have died.

There are only two ways a rhinoceros beetle, once on its back, can once more be uprighted. It can grab hold of a nearby object and use it to flip over. But on a cement sidewalk, there’s no such objects. So there’s only one option left: someone must help it.

As I was thinking about that beetle, I realized that the same thing is true of us, in a sense. We can work hard to armor ourselves, emotionally, spiritually. But when we get ourselves flipped on our backs… We are helpless, too.

Any set of armor has its limits. But thankfully for our beetle, I happened to come by. Thankfully for us, Jesus is always close by. We simply must give up struggling, with all our armor, and in our characteristically hoarse, embarrassed whisper, be like… “I messed up again… Please help?”